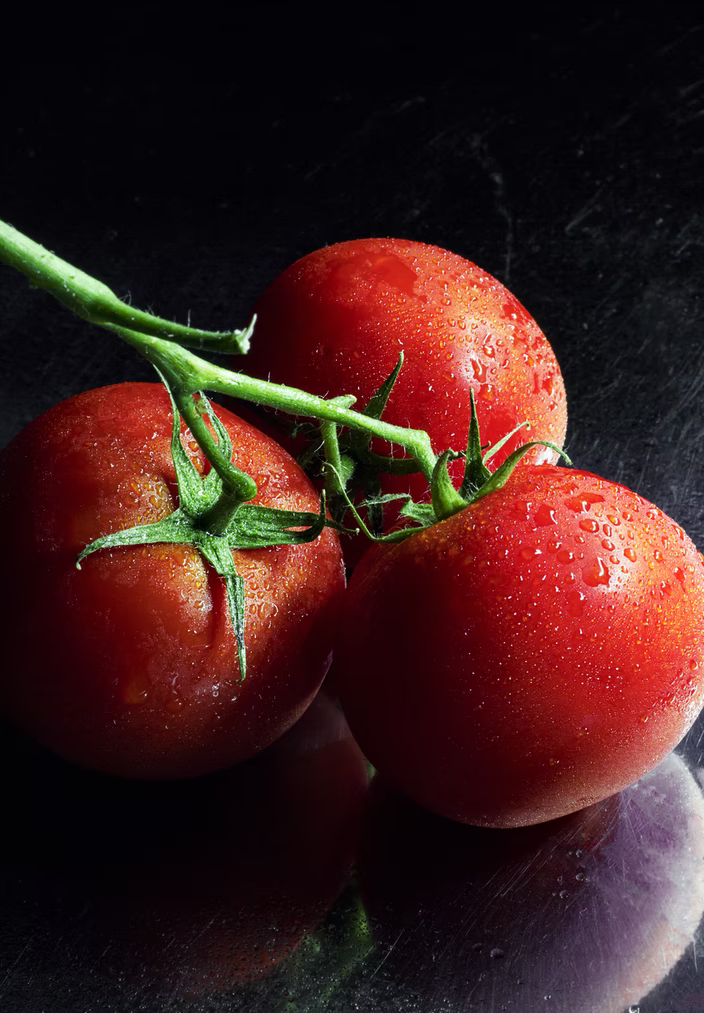 Tomatoes are a staple ingredient in so many recipes and cuisines that you can never have enough of them on hand. Because of this culinary versatility, tomatoes are the go-to choice of produce for many home gardeners. However, the seemingly infinite number of cultivars on the market can leave any beginner gardener feeling confused. To start making sense of your options, you need to first understand how the different tomato varieties are categorized. First, tomatoes are either heirloom or hybrid. These terms have nothing to do with size, shape, color or any other physical trait but everything to do with how they were bred. Heirloom tomatoes are open-pollinated, which means they are allowed to self-fertilize naturally by wind, birds and insects. Tomatoes are considered “heirloom” because they are self-pollinated through the unique influence of the local environment and then passed down for at least two generations. As a result, heirloom tomatoes can show a wide variety of characteristics, making them an exciting next step for more experienced gardeners who wish to experiment and diversify.

Hybrid tomatoes are manually pollinated for the purpose of consistency. Usually, a seed company decides which plants or species to cross-pollinate to produce the most favorable qualities. Hybrid tomatoes may be bred to meet specific requirements, such as ease of growing, disease resistance, size, and output. Because many hybrid tomato varieties are bred for desirable growing characteristics, you may want to start with a hybrid tomato if you’re a beginner gardener. The terms “determinate” and “indeterminate” refer to the shape of the tomato vine and how it grows its fruit. Determinate plants grow in a bush shape until they reach a certain height, at which point they stop growing upward. Their branches and stems are very sturdy and produce clusters of fruit that mature after two months. Determinate tomato plants may be better for beginner gardeners because they can easily be set up in a container or pot with a tomato cage.

Indeterminate tomato varieties produce long, trailing vines that grow endlessly unless killed off by cold temperatures or disease. These plants can reach anywhere from five to fifteen feet in length! Indeterminate tomatoes are more suited to those who don’t mind putting in the extra effort to prune them or train them to a trellis. However, they are not recommended for indoor cultivation since they require such a large amount of living space. 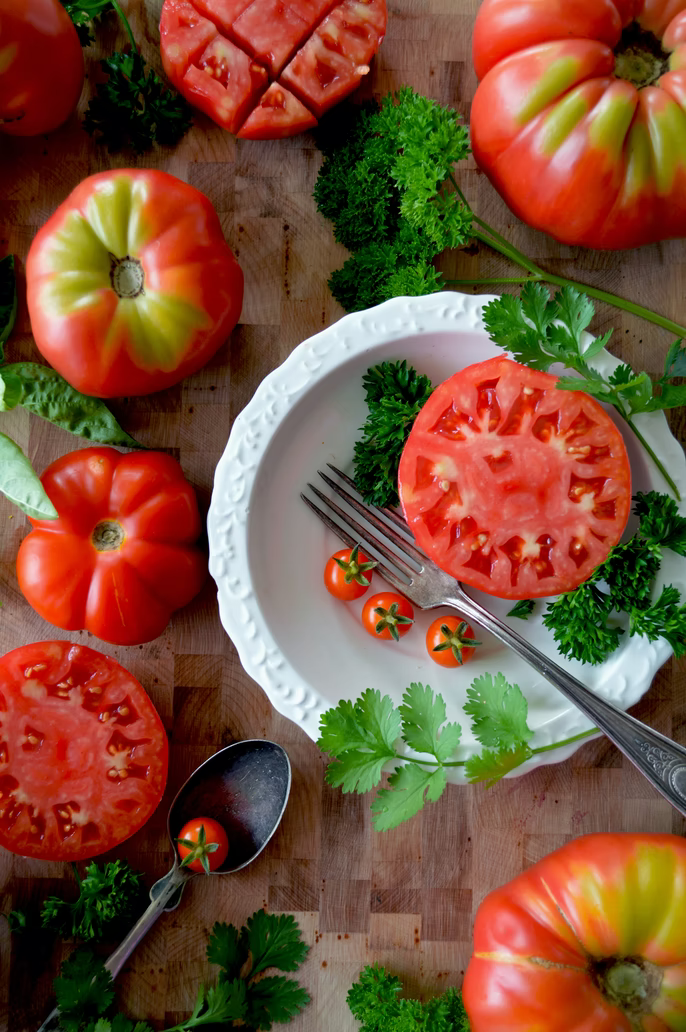 Aside from hybrid/heirloom and determinate/indeterminate, tomatoes are also categorized by their physical traits, such as size, color, and shape. These are the most common types of tomatoes and a few exemplary cultivars of each to get you started. 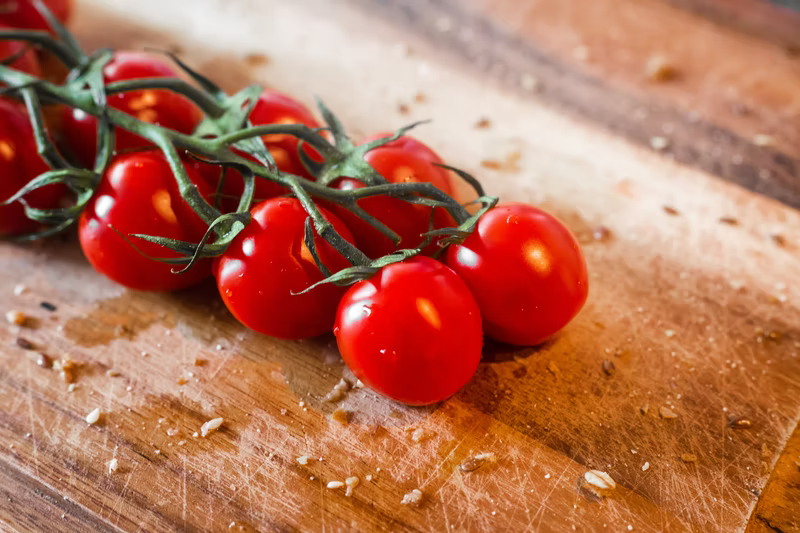 Snackable and golf ball-sized, cherry tomatoes come in many vibrant colors from red to orange and yellow to purple. They are by far the easiest to grow due to their small size, resistance to common problems, amenability for the indoors, and speedy growing time. Plant them in containers with chicken wire for support, and place them in a window where they’ll get lots of sunlight. After about a month, the seedlings will have already grown up and started producing more fruit than you bargained for. 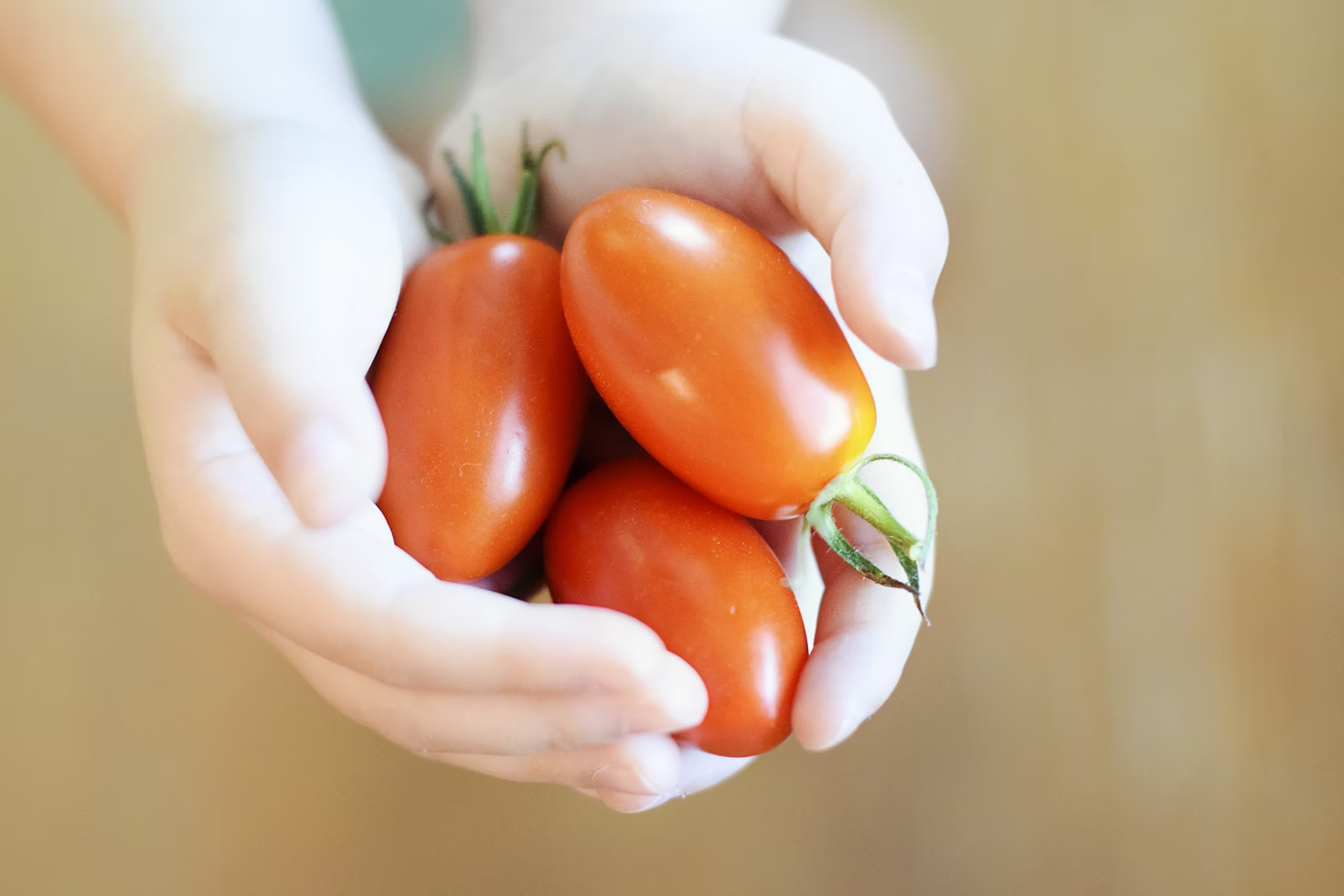 Plum tomatoes are another excellent variety for indoor growing and beginner gardeners. Plant the seeds in a tray and water frequently until they sprout, then transfer them to a medium-sized pot. The plum tomatoes will be ready to pick after only two to three months. The medium-small, oblong-shaped fruit is a popular choice for canning, sauces and pastes. 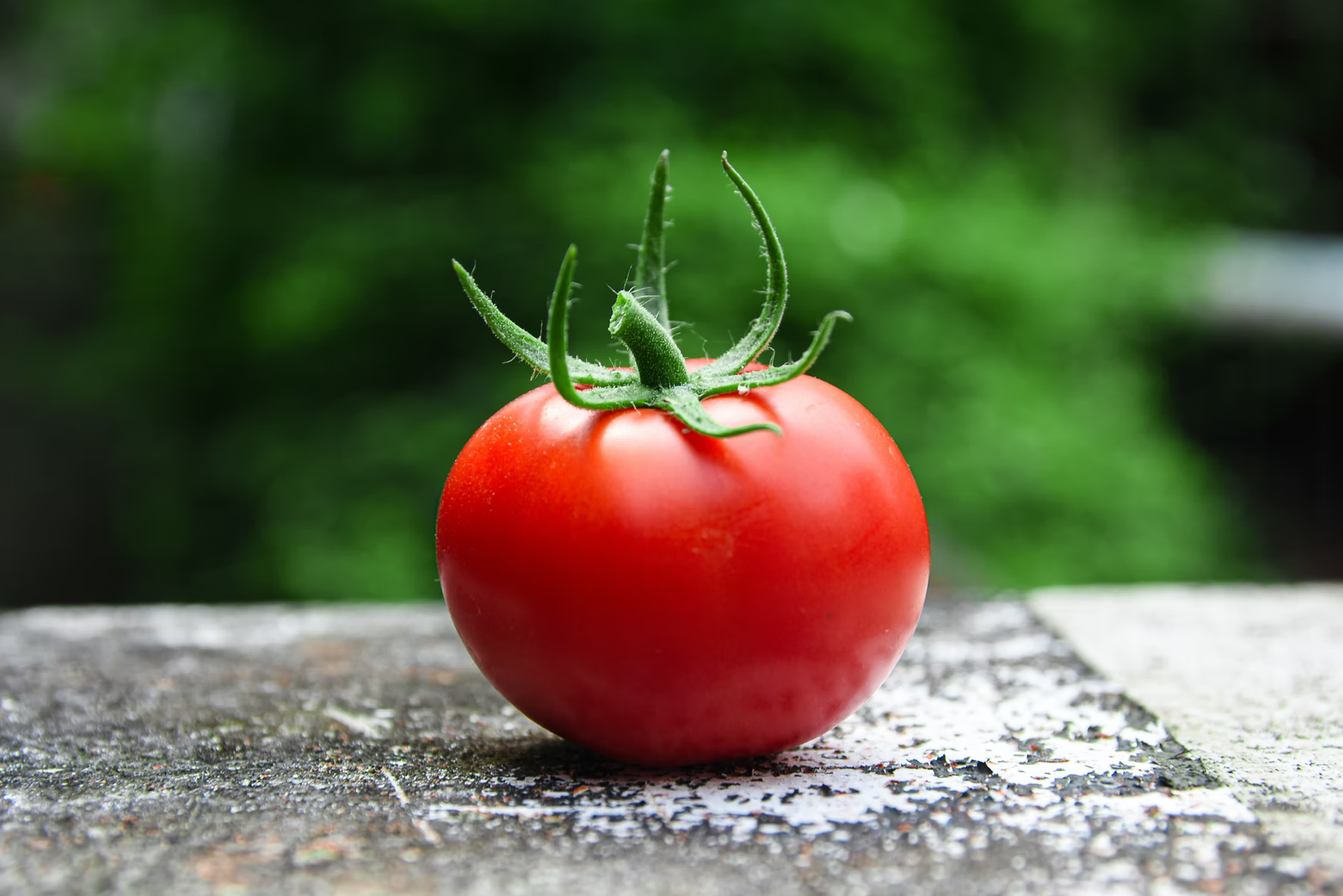 Globe tomatoes are the most common type of tomato that you’ll see at your grocery store. These perfectly round, medium-sized tomatoes come in red, yellow, and green. They taste just as delicious when sliced for a sandwich as chopped up for a salad. Globe tomatoes are usually determinate, making them versatile enough to grow in containers, indoors, in your garden or on your porch. 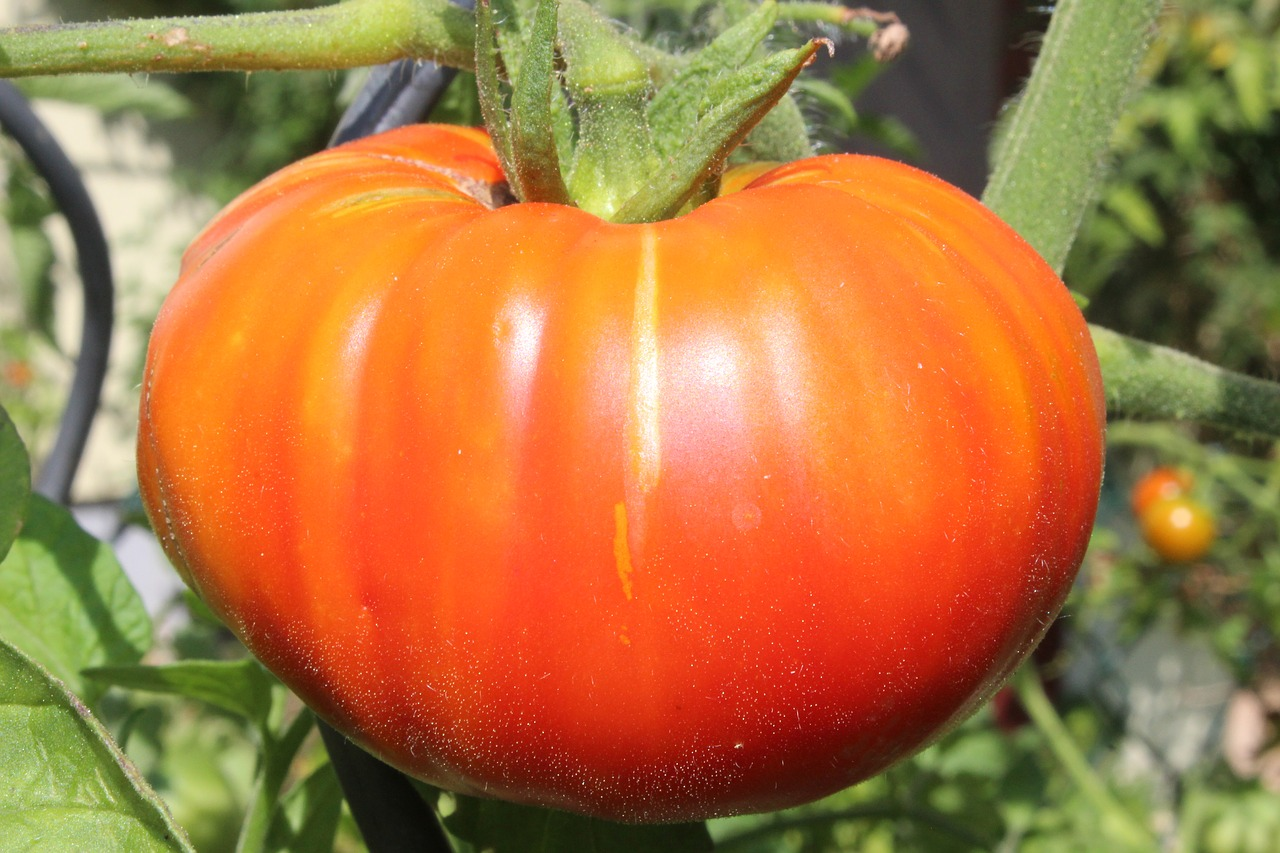 Perfect for slicing and dicing, beefsteak tomatoes are among the largest varieties, weighing up to a whole pound per fruit. This tomato family is predominantly indeterminate and therefore will require plenty of outdoor space in a sunny patch of your garden. They take about 85 days to mature and produce fruit, which is practically all three months of your summer. Therefore, it’s a good idea to plant the seeds indoors in the early spring and then transfer the sprouts outside once the garden beds warm up. Heavy beefsteak tomatoes will need to be tied to tomato cages for support until they are ready to be picked. Though they are the fattest and juiciest tomatoes, they may be a bit too involved for beginners to tackle. A solid alternative to beefsteak tomatoes, oxheart tomatoes are known for their large size and peculiar heart-like shape. The fruit grows to be anywhere from one to three pounds and usually comes in red or pink. Oxheart tomatoes are also usually indeterminate, requiring pruning, tomato cages, and a long growing season. For this reason, they are a good choice for gardeners with more experience and plenty of outdoor space. Determinate tomato varieties like cherry, plum and globe are typically not too difficult to grow because they can be situated in indoor containers. On the other hand, indeterminate varieties of beefsteak or oxheart can pose an exciting challenge for veteran gardeners. While you can trust hybrid tomatoes to be consistent year after year, heirloom tomatoes may sometimes be a bit of a wild card.

Your choice of tomato variety will depend on your comfort level with gardening, how much time and effort you’re willing to put into the project, and how much space you have available. Once you know how much you’re able to handle, choose from the list of recommended cultivars and get started this spring with your exciting new tomato endeavors!